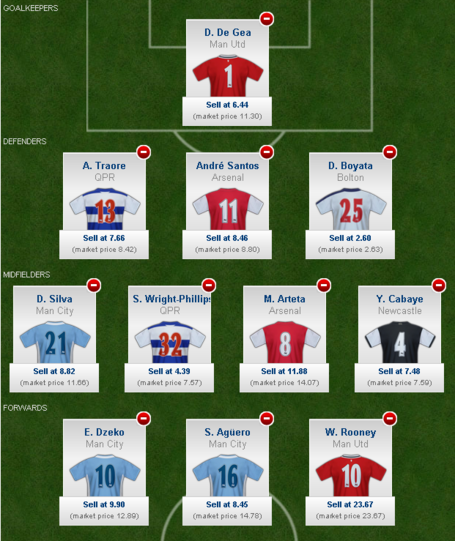 It's all change at the back for me as Kieran Gibbs seems to have lost his place to Andre Santos.  Who knows what is going on at Arsenal but the Brazilian did but up good points against Rovers, and gets Bolton at home this week.  Another flying (former) Arsenal fullback, Armand Traore, gets the nod too.  I was hoping to get him last week but didn't like the way he limped out of the Newcastle match previously.  My loss as he even got an assist.  Queens Park Rangers host Aston Villa, which isn't a great matchup, but I do like the option.

Another QPR new boy, Shaun Wright-Phillips, remains a bright spot in my otherwise run-of-the-mill lineup. He continued his good form in an advanced midfield role, and at 4 and change is becoming an indispensable player.

Maybe not as indispensable as David SIlva, however.  This was Silva's worst week to date, but he's still putting up points with the promise of continued returns.  Edin Dzeko and Sergio Aguero round out the Manchester City contingent.  Hosting Everton isn't an ideal matchup, but I dare anyone to start dropping these players.

That being said, I did move former Gunner Nasri out for current Gunner Mikel Arteta.  "Who knows what is going on at Arsenal" but Arteta scored a goal and was taking corner kicks.  His price jumped as a result and it was worth getting him in the team before that happened.

The final midfield spot is a bit of an enabler. Yohan Cabaye is becoming the almost man for Newcastle, striking the bar against Aston Villa on a lovely snap shot from range. However, I like that he's shooting and taking kicks. Newcastle also host Rovers on Sunday and that seems to pay off. I was origianlly looking at Gabriel Obertan as a true enabler, but picking Dedryck Boyata in defence allowed me to move off someone whom I'm taking to calling "The Invisible Man".  I just never see him on the pitch.  Sometimes I do see him, but I've yet to see him make an impactful play. Until then, I'll keep my distance.

Of course, all this movement is to afford Wayne Rooney.  I didn't keep him against Chelsea and I almost paid a very heavy price. He ended the day with a respectable 9.5 points, but missed a penalty, hit the post on another shot, and had Dimitar Berbatov skew what would have been a assist off target. Manchester United are at Stoke this week, and as we know that's a tough place to play. In fact I originally had Javier Hernandez in the team, but with his potential injury layoff combined with Rooney's irresistible form at the moment, I don't want to take the chance of missing out.

Who's on your barn door team this morning?