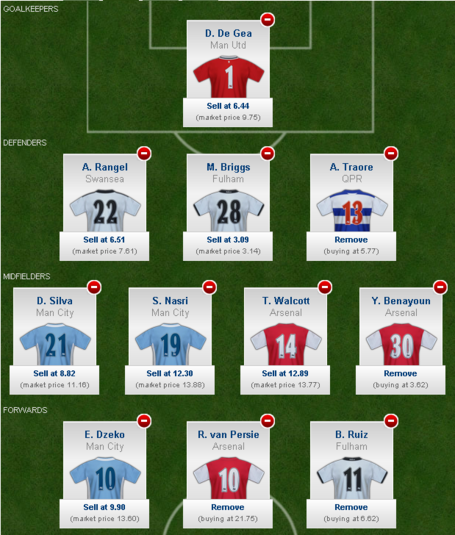 Here's my mid-week attempt to assemble a squad for the upcoming weekend. The defence is largely unchanged, with David De Gea, the wonderfully mellifluous Angel Rangel, and Matthew Briggs (though John Arne Riise started and played an hour of Norway's 0-2 loss to Denmark yesterday). I have brought in Armand Traore after his move to QPR. Hopefully he's an attacking left-back or even a spot starter in midfield. We'll see.  Traore and Briggs are probably on the bubble.

In midfield I've added Samir Nasri to complement David Silva, who is playing like a season keeper.  Theo Walcott and Yossi Benayoun (cheap and probably starting in place of the still suspended Gervinho) host Swansea, and while the Swans aren't pushovers (see Rangel, Angel above) Arsenal will be looking to put a few past the newly promoted team.

That's why I've made room in my team for Robin van Persie.  He's more expensive, thanks to his consolation goal at Old Trattford but he is likely still value-for-money should things go Arsenal's way this weekend.  Edin Dzeko gets a barn door place after his amazing four goals against Spurs. The final spot was either Sergio Aguero or Juan Mata, but with doubts over Aguero's staring place (flying back from India) and Mata's role in the team I'm leaning towards Fulham's new boy, Bryan Ruiz.  They're playing Blackburn Rovers this weekend, which seems to be the recipe for fantasy success this season.  Well that or playing for a Manchester side.