Some late night (for me) trading has brought some unexpected names to the squad. Gone is Raheem Sterling. He's done well, but is he burnt out? Gone is Phil Jones. Does he start over Smalling? Probably, but will United keep a clean sheet? Probably. *sigh* Ok, I needed the money. 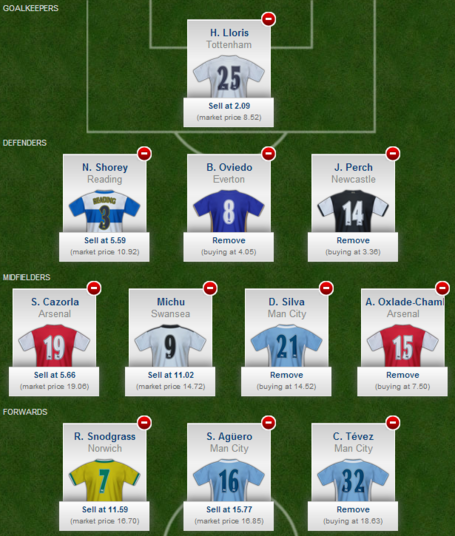 Hugo Lloris - The Llorax at 2-something is a season keeper. I had Jan Vertonghen in the side as well, home to Stoke being ripe for a clean sheet, but you've heard this before... I needed the money.

Bryan Oviedo - This week's random defender. There's a chance he plays on the left-side of Everton's midfield. Maybe he doesn't, but at the price it's worth the gamble that he does.

James Perch - Perchinho in midfield against Queens Park Rangers. A clean sheet would be great. A shot on target would be gravy. That being said, I would consider a few tackles won and staying out of the referee's notebook to be a successful outing.

Santi Cazorla - season keeper, tube strike next "week" or not.

Michu - Hopefully he'll score, or at least trouble United with a few shots on target. I'd like to keep him long-term, even at 11. Avoiding his fifth booking before January is going to be key for his fantasy managers.

Alex Oxlade-Chamberlain - I don't believe the Arsenal hype, but I'm not immune to it either. I can't afford Theo Walcott, but the Ox seems like a better bet than Sterling at the moment. And yes, I know I'm going to regret that statement very, VERY SOON.

Robert Snodgrass - West Brom will likely be without both Claudio Yacob and Youssuf Mulumbu. I'll take some action on Norwich then, and Hot Snoddy has been, well... hot.