Another good week for my team -- but another week where I feel let down. I grabbed 101.50 points with Antonio Valencia, Gylfi Sigurdsson, and Papiss Cisse chipping in with the majority of those points.

So it's been a rough few days trying to improve my team to take him on going forward. Where did we net out after another Saturday, Sunday, and Monday working the Barn Door? Join me after the jump. 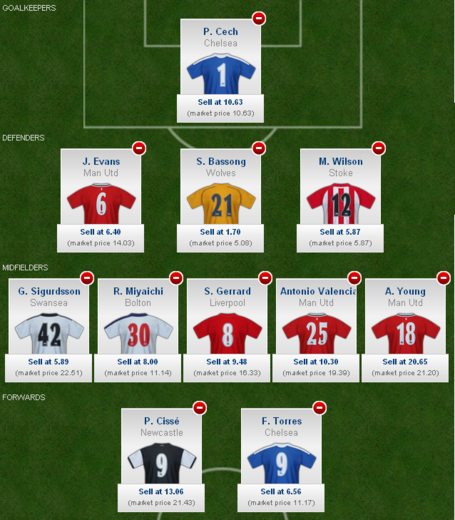 For those of you keeping track at home, the changes include:

I'm sorry to sell Rooney, but he hasn't been worth the price. I'm paying above the odds (a lot of you have him at 12) for BFAY and Neal certainly has him at the discount. I feel like that allows Neal the easy block, but it beats shipping points to him week after week.

Fernando Torres... what can I say? He's dead for me for fantasy. It's been probably two full seasons since I last got value picking him. But if he is back in form... and if he is going to be starting in front of Didier Drogba... and if Chelsea are going to hold serve against a resurgent Wigan side... well, no one has ever accused me of learning from my mistakes. (See Bolton players, picking them.)

I wonder if we'll learn anything from Chelsea's Champions League match on Wednesday?

Marc Wilson is a sure-starter in the Stoke side that hosts Wolves, and when they play well, Wilson is usually in line to return value. I would love to get to Ryan Shotton as I think he'll line up in midfield, but currently I'm 0.57 short.

Which brings me to Steven Gerrard. I'm sick of him. But his next two fixtures - Aston Villa, then at Blackburn Rovers - are tasty. Do I gut him to get Shotton? And if so, for whom? Not a lot of good, mid-price players left in the game. It's all expensive studs and cheap enablers.

Maybe it's the right time to spring for Carlos Tevez? The fixtures certainly say no. The recent history - even with Liverpool's dire form - says no. But the part of me that likes to outsmart the crowd thinks that too many people went in on Carlito too early, and that this week, not last week, is when he'll be given a chance to produce for Manchester City... and for fantasy.

Stick around, as this surely isn't the last iteration of the team we'll see before Friday (yes.. remember the deadline is Friday due to Swansea/Newcastle).