Unfortunately I'm unable to write my player picks this week but the good news is they would've been very similar to the picks Neal has already covered in The Week Ahead, so head across there now to read his analysis of the fixtures for the double gamers Chelsea, Spurs, Newcastle, Liverpool, Everton, Fulham, Stoke & Bolton and the players you should be thinking about for your Week 36 team.

Here's what I have on my Team Page at the moment ... 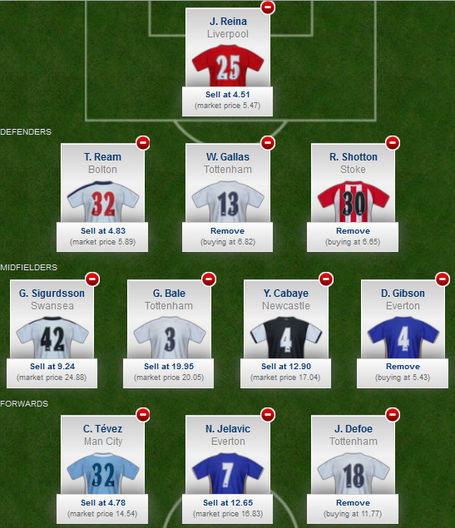 I quite like it but a hell of a lot depends on the Spurs team news tomorrow. There are rumours everywhere that Harry Redknapp & Emmanuel Adebayor have had a huge bust up, and if that is true and he's not in the squad then I think Jermain Defoe becomes an insanely good pick. If not I'll reassess things and may well bring Steven Pienaar (held behind the scenes) back in Darron Gibson's place and try to stretch for Aaron Lennon instead of Defoe in a 3-5-2.

I like the Ryan Shotton pick as Andy Wilkinson is rumoured to be out, William Gallas should be set for 2 starts but I'm sill undecided on whether to keep Yohan Cabaye or go for Hatem Ben Arfa to free up an extra couple of units to spend (which I could need when switching out Defoe). Pepe Reina, Tim Ream, Siggy, Gareth Bale, Carlos Tevez & Nikica Jelavic will all stay. I decided Papiss Cisse @ 22 was too much with Newcastle playing two tough away games but accept it's a huge risk given his amazing form.

That's my thinking - I'll update you all on how it's changed on Saturday morning in the Pre-Deadline Countdown thread. How's your team shaping up?