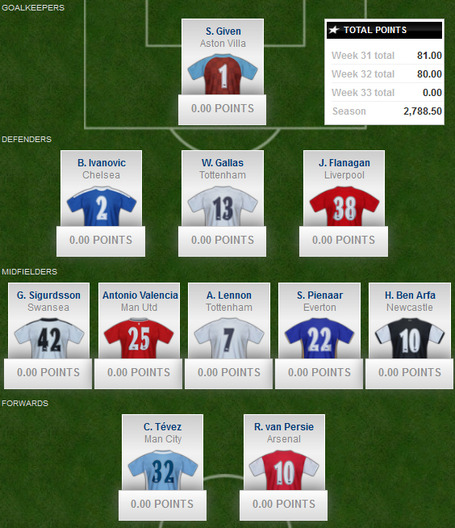 Fear got the better of me this morning - I managed to convince myself that Nikica Jelavic and Steven Gerrard would be rested ahead of the FA Cup and because neither player has a game in Week 34 I'd be dropping them anyway on the barndoor anyway so their discounts became irrelevant.

I therefore swapped swap them for two player I felt would be certain starters - Steven Pienaar (who is cup-tied at the weekend) and Hatem Ben Arfa which gave me the Newcastle representative I needed. 3-5-2 is never ideal but I feel it's well balanced and I'm hoping to break 100 points for the first time in 3 weeks (now watch Jelavic & Gerrard start and score a brace each).

To confirm Week 34 contains no games for Liverpool, Everton, Chelsea, Tottenham, Newcastle, Fulham, Bolton or Stoke. I know there will be a double week for many of these teams in the future but you really shouldn't be taking any zeros at this stage of the season, so look to dump all but your biggest discounts (e.g. P.Cisse @ 6) on the barndoor if they don't have a game.

What did you end up with?