Season Wrap-up and a Look Ahead: Liverpool

Share All sharing options for: Season Wrap-up and a Look Ahead: Liverpool

Are things at Liverpool all THAT broken? The media and the 2011-12 table would have you believe they are. A closer look at the facts lead me to believe that things could get much better and fast if Liverpool recognize what their problem is and move decisively to solve it. Oh, and for those of you wondering, it ISN'T the much-criticized group of central midfield players.

Before we get to the analysis, a little background. I am a fan of structured, objective analysis. I am generally NOT a huge fan of the way statistical analysis and the term "Moneyball" have started making their way into the game so far. My quibble is that statistics by themselves (think "David Silva led all players with a pass completion rate of 93%") are quite useless. What they need to do is tell a story. In this case, it is my goal to tell two stories using the 2011-12 statistics for each team:

2) What does that tell us about what the priorities for the summer SHOULD BE?

In some cases, the numbers will tell us what we expect them to (e.g., Arsenal need to make fewer mistakes at the back, Stoke are an incredibly poor attacking team) and other times it will bust popular myths (we'll get to that one here quickly).

With that introduction, we'll start with a breakdown of how things went right and wrong for King Kenny and the Anfield faithful this past season. 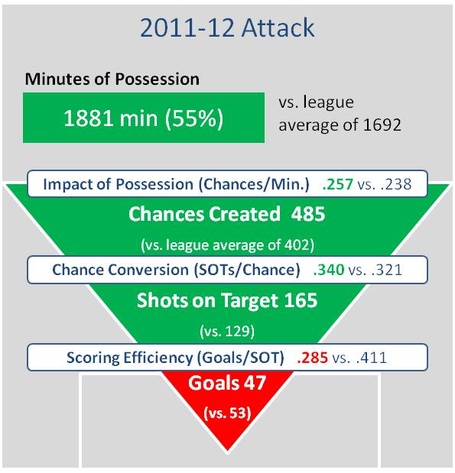 [Stats aggregated from a combination of EPLIndex.com, WhoScored.com, and PremierLeague.com]

Liverpool's attack was actually quite good... up until the point where they were supposed to actually put it in the net. This analysis isn't particularly concerned with HOW they attacked but rather how good they were at it regardless of what method they chose. As you move through the funnel from possession to chances created to shots on target to goals scored you see that the Reds were well above league average right up until the end when it came time for them to score. Here's a quick breakdown by step in the process:

Possession - You can't score unless you have the ball (unless Jolene Lescott just GIVES it to you and your funky haircut right in front of the goal) and Liverpool had the ball a lot (55%) of the time. This is among the higher totals in the league which would lead us to believe that they were good at winning the ball at the back and in midfield and keeping it once they got it. Score one for the much-maligned group of Liverpool central midfielders (cut to Charlie Adam, Jordan Henderson, and Steven Gerrard nodding and smiling).

Impact Possession - Possession by itself is only really useful in that it means that the opposition doesn't have the ball and won't be scoring during that time. We have all seen Arsenal (and others) hold the ball for huge chunks of the game with nothing of much use to show for it. The impact of Liverpool's possession (measured in chances created) isn't as much above average as their possession is but their rate of chances per minute the ball is possessed is still comfortably above the league average. The combination of their strong possession and their above average ability to convert that possession into chances means the attack, especially the part that usually happens in midfield looks very good so far. (Gerrard, Adam, and Henderson now joined by Maxi, Downing and the rest all feeling much better about themselves).

Chance Conversion - As we get closer to goals being scored, it is amazing to realize that Liverpool not only possessed the ball a lot and created a lot of chances but they were also fairly efficient converting those chances into Shots on Target. In other words, while other clubs were missing the target, having shots blocked or otherwise squandering their chances, Liverpool's were still "in play" as chances played out and shots were taken.

Scoring Efficiency - Now, the rub. Liverpool can't convert all the attacking goodness we just finished describing with even decent efficiency. If their shooting accuracy was even league average they would have scored in the mid-60s rather than a below average 47 goals. Of the 20 Premier League teams, they finished 19th in this regard (Aston Villa was 20th if you're interested). Oh, and this would have put them at least on the cusp of a Champions League spot instead of looking up at their local rivals Everton.

Attacking Summary - This is where science becomes art and you have to decide exactly how you go about converting more shots on target while not changing the fact that many were actually created. As you might imagine, the root of Liverpool's problems appears to be Andy Carroll (23 SOT, 4 G) who is easy to both dismiss as a horrible buy and dislike on general principles. The problem, however, goes deeper to include Dirk Kuyt (15 SOT, 2 G) who is very easy to like for all of his effort and, to a lesser extent Luis Suarez (37 SOT, 11 G). The only two out-and-out attacking players who were efficient in any measure for Liverpool were Steven Gerrard (6 SOT, 5 G) and Craig Bellamy (10 SOT, 6 G) and neither of them could stay on the field for long.

There has been much discussion of buying wingers and midfielders but what this analysis tells me is that the wingers would look a LOT better if the forwards were even average at doing their job. Not to rub it in but if Liverpool had paid the relatively small fee for someone like Nikica Jelavic in January their lot in life would have improved greatly. The worrying thing is that their Summer focus seems likely to yield more of the same as they fix the not broken midfield and not the misfiring forward line. 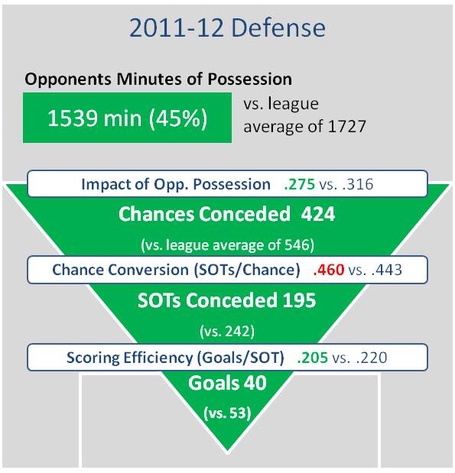 [Stats aggregated from a combination of EPLIndex.com, WhoScored.com, and PremierLeague.com]

I'm going to leave out the detailed step-by-step analysis of Liverpool's defense because there's MUCH less to say about it. It was solidly above league average at nearly every stop along the way. The upside for Liverpool here is that much of this happened after Lucas got hurt so there is reason to believe that their situation will only improve as he comes back to health in 2012-13. The only minor quibble that you might have is the red number under "Chance Conversion" (meaning that Liverpool's opponents were slightly more likely than league average to get a SOT when a chance was created). The fact that Liverpool were well above average when it came to possessing the ball and stopping shots that did go on target more than mitigate this one mild weakness. The big question for Liverpool then will be whether they can maintain their defensive efficiency as new management comes in.

Summer Plans - Liverpool should be focusing all of their considerable financial resources on finding forwards who can score goals. If they could come up with an under-the-radar Papiss Cisse or Nikica Jelavic (or even better two) they'd be in great shape heading into the season.

Reasons for Hope - The picture here is very similar to that at Chelsea with the exception of the fact that Chelsea can shoot at least decently. Granted, Chelsea's league finish doesn't match Liverpool's long term goals but finding a strike force that can convert SOTs at a league average rate and leaving everything else EXACTLY THE SAME. Would put Liverpool in a solid position to challenge for the Champions League next season which would be a HUGE step forward.

Reasons to Despair - The myth out there is that Luis Suarez is an elite forward. He certainly seems like he has the skills to be one but we have enough evidence to know that he's really this inaccurate and it isn't just some temporary bad luck. Throw in the fact that Liverpool seem overly focused on their flanks rather than their forward line and it seems more likely than not that Liverpool will try to solve the wrong problem again this summer.