Season Wrap-up and Look Ahead: Arsenal

Share All sharing options for: Season Wrap-up and Look Ahead: Arsenal

With a topical reason to do so, we started our season wrap-up journey with a look at Liverpool and how their season played out. Where they were strong (almost everywhere) and where they were tragically weak (converting shots on target to goals). I got some good feedback on how the format might be improved with the best two being:

The first one is fairly easy and I will try to work that into the equation, especially for teams like Everton, Newcastle, Liverpool, and Chelsea which finished in shouting distance of the top but didn't make it. For teams further down the list I may alter that to reflect how they performed vs. league average and vs. the relegated to give you an idea of how safe they might be.
The second suggestion/request might take a little more doing as I'm not sure where I could get that data but I agree that the answer to the question makes some impact on how you feel about Liverpool's creative wheelhouse (if the shots on target were good then the shot-takers were likely poor but if the service was bad it might be that the forwards did very well to even get that many on target). What I can commit to is that as I see points of interest like this I'll try to dig a little further if there is data to be had.
With that, we'll move back up to the top of the alphabet and the Gunners who had a very interesting season indeed and face an even more challenging off-season. Away we go: 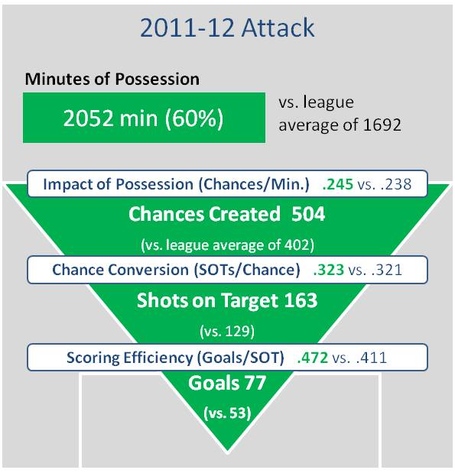 What sticks out about Arsenal's numbers on the chart above is that while all aspects of their attack are green with respect to the league average, the effectiveness of their possession and their ability to convert Chances into Shots on Target are just about average. Their entire advantage is predicated on the fact that they are EXCELLENT at keeping the ball and modestly above average when it comes to converting their Shots on Target to goals.

The Real Issue: What the data points out is that Arsenal, for all of their possession and snappy passing, aren't much better at turning that possession into chances than are Norwich or QPR. They are, in fact, significantly worse than their peers in the table (Manchester City, Manchester United, Chelsea, and Spurs) at turning possession into something actionable.

The Bottom Line for Arsenal's 2011-12 Attack: Arsenal's huge advantage in possession did two things for them in 2011-12. The first was to throw off a high volume of opportunity for an otherwise average creative force to score goals. The second was that it helped them play defense by minimizing the liability that was their defense.

The Arsenal Defense (if you can call it that) 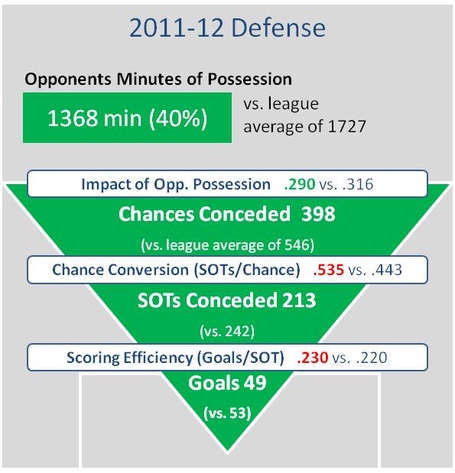 There is a lot of green on this chart which would lead you to believe that the Arsenal defense was better than average in 2011-12. That only tells half of the story. As mentioned above, Arsenal's strongest defensive weapon (by far) was not allowing the other team to touch the ball. Once the other team got the ball, things didn't look very good at all. All you need to know is that they go from being first in the league in possession allowed to the other team and are very much in the middle of the pack when it comes to goals allowed. What this tells me is that something has gone horribly wrong to allow very little possession to turn into something other than very few goals.

Who to Blame? As it turns out, Arsenal are both above average at preventing their opponents from creating chances from their possession. Even when compared to the other top of the table teams they trail only Manchester City in this regard (they are the equal of Spurs, better than Chelsea and Newcastle and significantly better than Manchester United). Where things fall apart is that they are abysmal (and by that I mean worst in the league by a decent margin) at allowing their opponents to turn Chances into Shots on Target. They certainly aren't spectacular when it comes to keeping those Shots on Target out of the goal but they are pretty close to league average on that count. It is interesting to note that the other good teams in the league are much better on this last count than Arsenal.

So, you ask, who does this point to? In my mind it points to Arsenal's lack of a holding midfielder and their entire defense - especially the depth. I like Alex Song a lot as a player but the more you watch him the more you realize that he's more Yaya Toure than Patrick Vieira. This isn't to say he's as good a player as Yaya but that he would likely be more effective with a true Nigel de Jong-like holding player behind him than he is being positioned as a protector of the defense. Assuming that isn't the entire solution then there needs to be better depth all across the back. I haven't run the numbers to determine how Arsenal's numbers look with their entire first team defense of Vermaelen, Koscielny, Sagna, and Gibbs vs. when Mertesacker, Djourou, Squilaci, et al are deputizing but I'd imagine that the first grouping is at least not as dire as these numbers make it look. I'm not saying they'd be great but assuming Arsenal can keep their possession game going they wouldn't need to be much more than average to significantly reduce the number of Shots on Target seen.

That brings us to Szczesny and whether he is the answer or not. This essentially kickstarts the same conversation that was raised about Liverpool's attacking Shots on Target. If not all SOTs are created equal, how difficult were the shots that Szcz faced compared to those faced by his peers. If they were, on balance, equally difficult then he doesn't look very good in comparison to David De Gea, Joe Hart, Brad Friedel and the rest. If the defense was yielding shots that the keeper had little chance of saving (think point blank unmarked headers off of set pieces and one-on-ones with the keeper from 30 yards out) then you can hardly blame Szcz for a slightly lower save percentage. My inclination is to believe that Szczesny can potentially be an above average keeper if Arsenal get tighter in front of him but I concede that the jury may still be out on him until they do so.

What Next? Given the analysis above, here are my priorities for Arsenal over the summer:

Fantasy Implications
As with Liverpool, please add your comments not only about this article but about other aspects of the season in review that you'd like to see. I'll do my best to keep evolving the format as the data and my time allow.