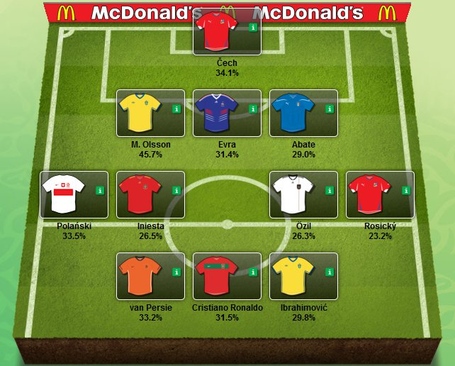 Just a quick note to confirm that the McDonald's Official UEFA Euro 2012 fantasy football game is open for business - it's now up to you to assemble a squad of 15 in preparation for 8th June.

In terms of scoring it is very similar to the Official Fantasy Premier League game (double points for captains etc.), you pick a squad of 15 and you get a wildcard, but make sure you study the rules on substitutions as you can really gain an advantage if you're clever about it.

It is possible to make manual subs in the middles of a "Matchdays" to replace players who scored poorly with a player on your bench who is yet to play in that round. This is always a gamble but those of you who played the equivalent McDonald's World Cup 2010 game will know that these gambles can pay off in a big way if the sub you bring in puts in a big performance. For this reason it's better to create a balanced squad of 15 starters rather than loading up your bench with cheap fillers who won't play. It's also worth noting you can only pick 2 players from the same country during the group stages, with this number increasing from the Quarter Finals onwards.

Make sure you read all the rules here: http://en.euro2012fantasy.uefa.com/rules/

I'm going to be in Poland for the first 10 days of the tournament for my stag-do so it's unlikely I'll be posting up any players picks, but I'll post my "Matchday 1" squad once I've selected it and we'll give league updates as the tournament progresses. If any of our readers have any player picks / tips then please feel free to write a fan post and we'll promote the best ones to the main page.

Let us know how your early squad is shaping up.