Aston Villa: The Season and Summer By The Numbers

Share All sharing options for: Aston Villa: The Season and Summer By The Numbers

After a bit of a hiatus to let my brain rest from the Premier League for a few days, I'm back with the third in the series of looks at how statistics describe the season gone by for each team in the league. In each case, we'll look at how much possession each team has and how much it concedes to its opponents and how efficient they are in each direction. You will find the comments on Liverpool and Arsenal elsewhere on the site as well as Jeremy's additional commentary on Liverpool's issues.

With that business out of the way, we move on to the disaster that was Aston Villa's 2011-12 season. It wasn't long ago that Villa were flying high with Everton as one of the "best of the rest" teams hovering just below the Champions League places. They had a core of players like Ashley Young, James Milner, and Stuart Downing in midfield an up-and-coming forward in Gabby Agbonlahor and a fairly solid defense in front of Big Bad Brad Friedel.

Where Everton has been fairly successful in keeping up their performances despite having key players like Jolene Lescott, Stephen Pienaar, and Mikeal Arteta leave, Aston Villa have not been nearly as successful is sustaining their success despite spending more on replacements like Charles N'Zogbia and Darren Bent. With the arrival of Alex McLeish a club that seemed to have the talent to be no worse than mid-table managed to be less than the sum of its parts. Here's a look at how things broke down for the Villains and how they can start to turn things back around in the wake of McLeish's sacking: 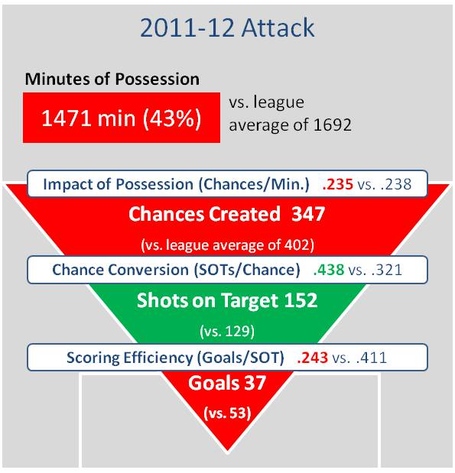 Not a very pretty picture is it? That's a lot of red on this chart and it starts with the fact that Villa were among the three worst teams in the league at possessing the ball (or the best proxy we have available). From an offensive standpoint, Villa compound their lack of possession by being only average at turning possession into chances. There is a bright side in that they do a very good job turning chances into shots on target but they then fall back down to being the worst team in the league (even worse than Liverpool) at converting Shots on Target into goals.

The Ball is Your Friend. With that little going well there is certainly a lot of blame to go around even after accounting for a manager who wasn't a good idea to start with. After McLeish I'm inclined to go right for the spine of the midfield where Villa just don't have the quality necessary. The story of Stilyan Petrov's illness is tragic but it distracts from the fact that neither he nor any of Villa's other central midfielders are good enough to inhabit the top half of the league's standings. Petrov, Bannan, and Herd are solid pieces but there's no one there that you have to alter your game plan to account for. The other player that Villa was depending on to create in central positions, Stephen Ireland, had a few moments but under-performed expectations by a long distance over the course of the season. Compare those midfield pieces with the teams that Villa would, until recently, have considered "peers" (Yohan Cabaye and Cheik Tiote at Newcastle; Gylfi Sigurdsson, Leon Britton, and Joe Allen at Swansea; or Leon Osman and Marouane Fellaini at Everton). No contest really.

And the Goals? I can't say I'm particularly optimistic about Villa's goal-scorers either but with Darren Bent on the mend and Gabby likely better as a secondary option than a primary one there's at least some hope. 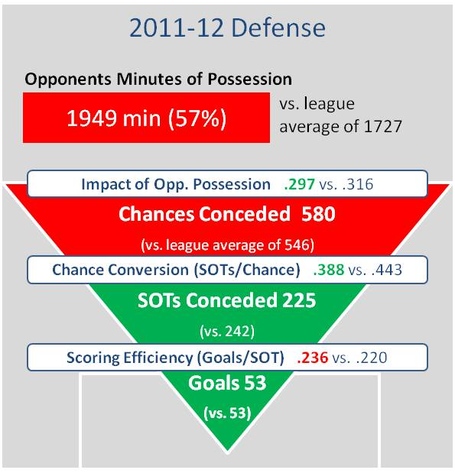 The worst part of Villa's inability to possess the ball is that it cuts both ways. They didn't hold it enough for a poor attack to gain any advantage available from a high volume approach (lots of possession, even inefficient possession would lead to goals). They also gave their opponents the benefit of a high volume approach. As the defensive efficiency chart shows, Villa were average or better across the board in the defending categories but despite being better than average they yielded exactly the league average goals because their opponents just had the ball THAT much.

Whether it is Roberto Martinez or someone else, Villa will have a new manager and that is the right first step. If it were me accepting that job, I'd make sure that Randy Lerner is committed to spending the money to significantly upgrade the spine of the midfield. The trio of Richard Dunne, James Collins, and Cairen Clark is a solid group at the back but they need a ball winner/distributor in front of them. If I were them, I'd think about Steven N'Zonzi and Stuart Holden from the list of players likely to be available for a reasonable price from the just-relegated teams. A move to Villa would represent a step up for both players and if they can swing 3% or 4% possession over the course of the season then, combined with Bent's return, Villa could be in a great position to bounce back to mid-table pretty quickly.

Assuming the new manager can manage to keep Villa's defense solid while improving possession and, as a result, the attack there are a few players who could represent some solid value:

The big concern with Villa is that they don't have the financial stomach to do the right thing with their central midfield. If they don't there's a real worry that they will continue to languish at the bottom of the table unless their new manager pulls a Gylfi/Cabaye-type rabbit out of his hat for next to no money.