So I finally got over the hump and signed up for the official Euro2012 Fantasy game. With next to no research - but you know that will be coming shortly - I set up a team. Here is the result: 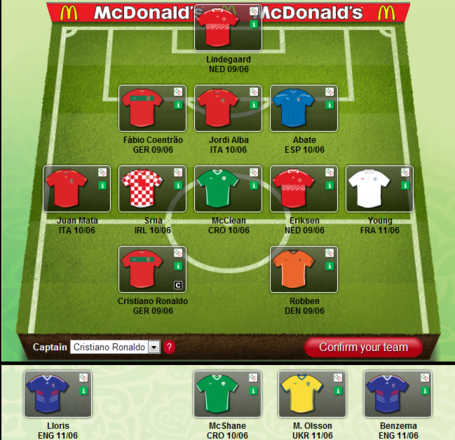 Without doing any research, I've mostly picked players that I know. I like Juan Mata and Ashley Young playing off a striker, but listed as a midfielder. Arjen Robben has never let me down in a major tournament (something Bayern fans can't say). Srna is an old favorite, but I'm not sure that I'll keep him now that he's no longer listed as a defender. James McClean looked good for Ireland over the weekend and I'm hoping he'll have a break-out tournament.

Much, much more to come, but for now... what do you think?