Share All sharing options for: A View From Euro 2012 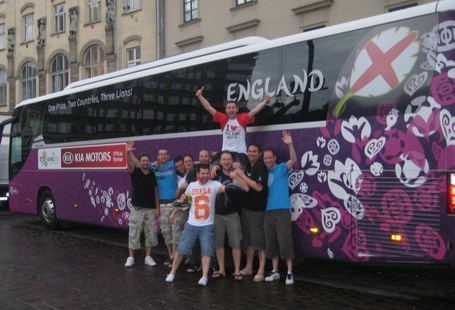 So I'm back from Poland, just about alive and kicking after a terrific week away for my stag-do (or "bachelor party" if you're from across the pond). In case you don't know what I'm talking about, I'm getting married in August so myself and 9 friends flew out to Krakow last Saturday to enjoy Euro 2012 and celebrate one of my last few weeks of freedom, staying just down the road from the England team hotel. We didn't go with a plan to see any games 'live' - we were heading there because Krakow was the base for the England, Holland and Italy squads so the city had set up two fantastic fan zones. We were able to enjoy a feast of football, watching all 14 matches on big screens with fellow fans from across Europe, sinking plenty of beers and vodkas along the way. There has to be an element of "what happens on tour, stays on tour" and I know my future wife will be keeping her beady eye out for any sordid details, so I'll keep this as clean as possible and mostly stick to the football elements of the trip. 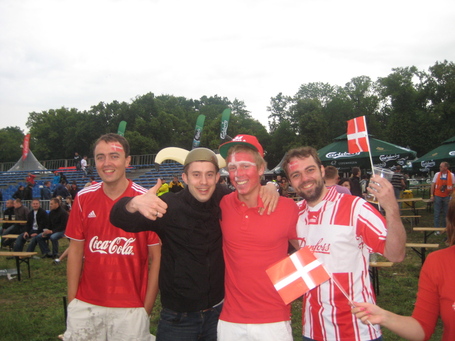 I'll start by stating that the Polish fans have really embraced the tournament; everyone we met was welcoming and incredibly friendly (and the women are beautiful). On the day we arrived we were standing outside a shop with England shirts on, when a random stranger walked past, shouting "Welcome to Poland" and this attitude from the locals continued throughout. We encountered absolutely no trouble at all, and while we were aware of problems in Warsaw for the Russia match, no other fans we spoke to had seen or heard about any trouble elsewhere. We celebrated with Polish fans in Market Square after their point against Russia, joined in their non-stop chanting of "Polska, Polska, Polska", shared a few "Mad Dogs" with them (a large shot of Vodka with Tabasco Sauce, ouch) and we all agree that it's a real shame the co-hosts haven't made it through to the knock-out rounds. Hopefully they continue to enjoy what remains of what has already been a brilliant exhibition of football.

As well as supporting Poland, we cheered on Germany vs Portugal as Ronaldo's general body language was its usual appalling self and we laughed heartedly as he missed chance after chance and looked like he was going to cry (has there ever been a footballer more aware that he is on TV during a game?). We shared in the disappointment of the Netherlands as we watched their defeat to Denmark with a huge contingent of Dutch fans in one of the fan zones. I was dressed-up as a giant pizza as we watched Italy hold Spain and was then quickly forced to change in to a Leprechaun outfit before Trapattoni's men were well beaten by Croatia, the first of 2 very disappointing defeats for the Irish. Chatting to their fans they obviously accept the Spain loss was hardly unexpected, but it was the manor of it that hurt - they simply rolled over. 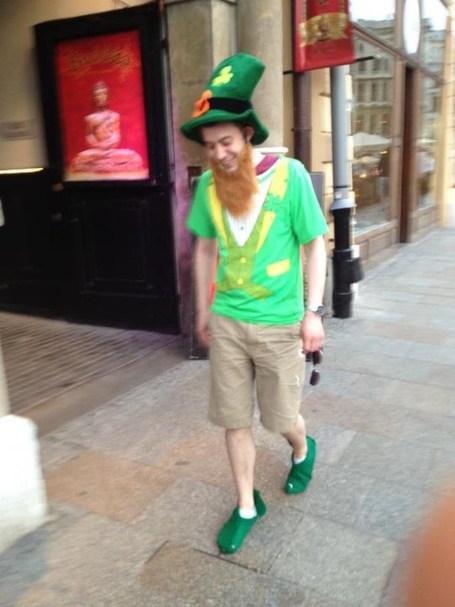 We made our way to Blonia Park for England's opening game against France with me dressed in over-the-top England clothing, watching the game with a small but passionate bunch of 100-or-so England fans and we were really very pleased that Roy Hodgson had the team organised and playing as a collective unit rather than 11 individuals. We all went crazy when Lescott scored and it was a thoroughly enjoyable match to watch even after Nasri equalised, with the exception of Carlsberg being the only beer on sale in the whole place . A point was well earned and we moved on to a bar to watch Shevchenko light up the tournament for the Ukraine with 2 excellent finishes. I don't actually remember the 2nd goal due to beer intake but I've been told his movement was like his first - like watching him in his prime. 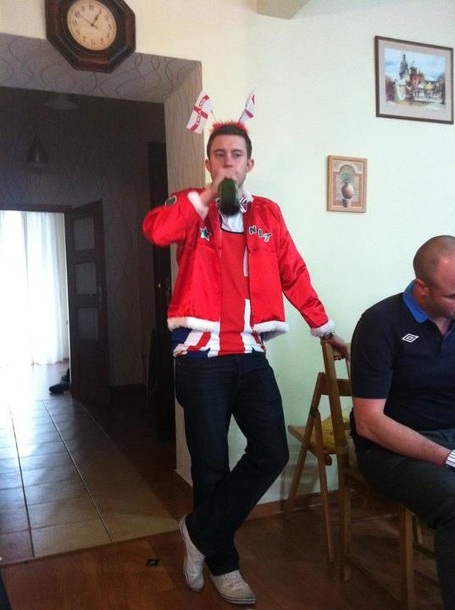 One of my favourite nights of the trip was the Portugal v Denmark & Germany v Holland double-header which we watched with 1000s of fans in a huge tented area near Krakow station. The atmosphere was electric as fanatics from all the teams involved plus a spattering of Polish, English, Italian and Spanish fans enjoyed 2 fantastic games of football. Nicklas Bendtner, hey? The Danes very nearly caused another big upset, with every neutral in the place supporting them and with some terrific banter between us and a large collection of Portuguese fans, but it was they who had the last laugh and they let us know it! The German fans then took over the majority of the tent, with a few Germany guys throwing our jackets on the floor and stealing our seats when we went to get a beer at 1-0 and forcing us to stand despite us asking nicely for our seats back. At this point we again decided to back the Dutch and I may or may not have accidentally on purpose spilt a beer on one of their heads when Van Persie scored. Alas, it was all in vain, we had a laugh about it, Germany deservedly won and their fans started celebrations that lasted well in to the night. 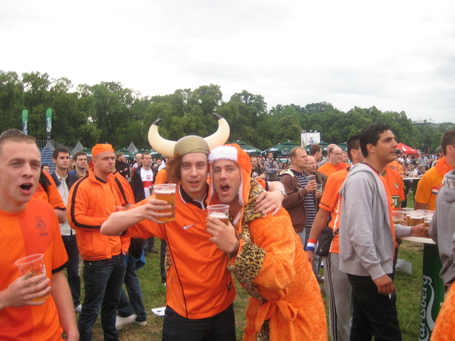 The following day I was dressed up in some questionable attire including an inappropriate t-shirt, mini skirt and inflatable clown shoes as my best-man went for maximum embarrassment. It was typical then that this was the night we bumped in to Roy Hodgson, Gary Neville and some of the other coaches who were on their way back to their hotel from a meal. The Neviller was on his phone and didn't seem too keen to be associated with me whilst wearing said t-shirt, but after replacing it with a Poland t-shirt I was able to convince Roy to have a quick snap. I told him that his new look England were doing us proud, he thanked us all for our support and shook our hands and we let him get on his way - a surreal moment and one I won't forget in a hurry. 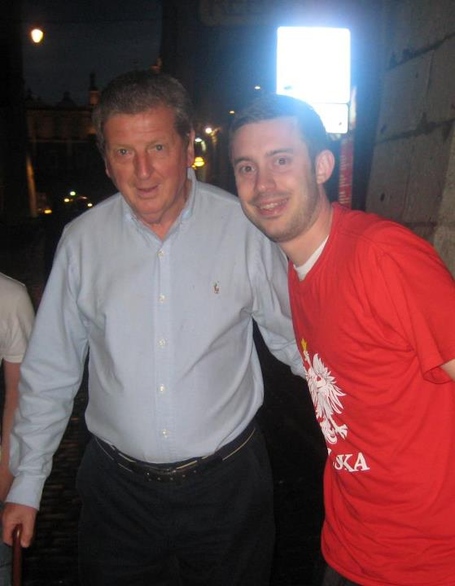 The trip was capped by England's 3-2 victory over Sweden, with the team showing a bit more attacking flair and plenty of pride in the shirt, fighting back to put themselves in a great position to qualify for the Quarter Finals. I'm sure you can imagine the celebrations that ensued, it was the perfect end to an incredible week and I'll never forget the effort my best-man Dante and the rest of the lads put in to make it so memorable. We travelled to Poland with no expectations for England, with our hopes destroyed by the shambles of World Cup 2010 (click here to read an article I wrote after the Algeria game 2 years ago), but we we all feel a bit of faith has been restored thanks to the way the team have played and conducted themselves in general. How far can they go? I assume a defeat to Spain in the last eight after finishing 2nd in the group, but you never know. 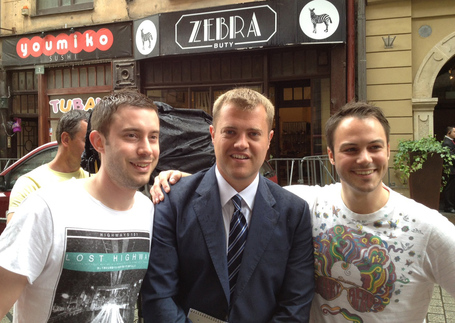 I can't reveal too many other details of the week so I'll wrap things up. It's safe to say we loved Poland and the people, the fans we met from across Europe and the football we've been able to enjoy. If you truly love football I'm sure you'll agree this is shaping up to be one of the best international tournaments for decades, so make sure you soak it up and watch as many of the remaining games as you can, because - like my Krakow adventure - you'll remember it for the rest of your life. 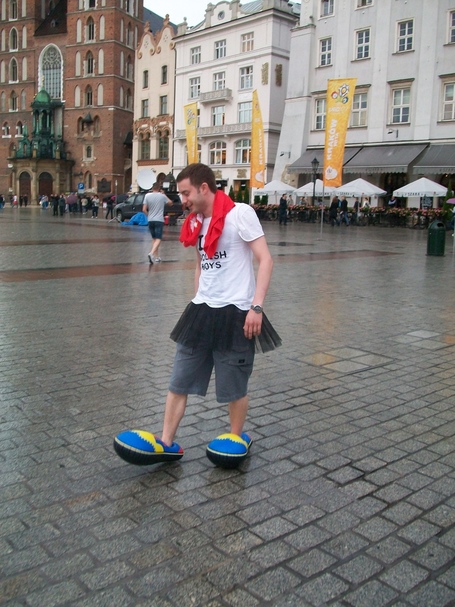 p.s. Somebody put my mates passport in the microwave - harsh. 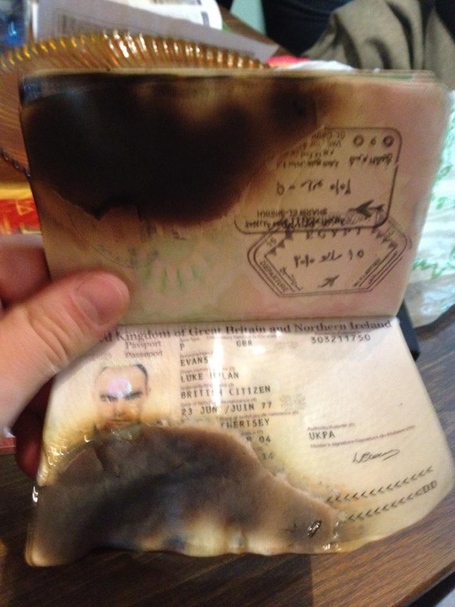