As you might have noticed, I hit a bit of a motivational snag in doing season reviews for each of the teams in the Premier League. This had a lot to do with 1) the fact that it's a long season; 2) MLS had started and I was doing really well in MLS fantasy (and still am); 3) lots of Euro2012 matches to watch and chats to host; and 4) my job has been fairly busy. That said, I did a lot of work compiling stats from last season and I'd hate for it to go to waste. What I'm going to do is take what I did and apply it in a slightly different way than I usually intended. Instead of doing an in-depth review of last season - let's face it, that's so, well, last season - I'll point the numbers toward what the team needed going into the off-season, what has happened so far, and how things are looking for the coming season. As the summer evolves and teams make major acquisitions, I'll update the posts to reflect the comings and goings.

Since we've already done Liverpool, Arsenal, and Aston Villa and Blackburn and Bolton have sunk down into the depths of the Championship, we find ourselves re-starting with the reigning Champions League and FA Cup title holders and 6th place finishers in last season's Premier League. Talk about an all-time odd set of finishes. Let's dive inside the numbers and see what they have to tell us (with the caveat about the possession time statistic presented by SBNation Soccer and We Ain't Got No History's Graham Macaree - I'm of the opinion that while Graham's analysis makes a great point, my analysis still holds up as a way to investigate where teams are strong and weak).

OK, on to the Chelsea analysis: 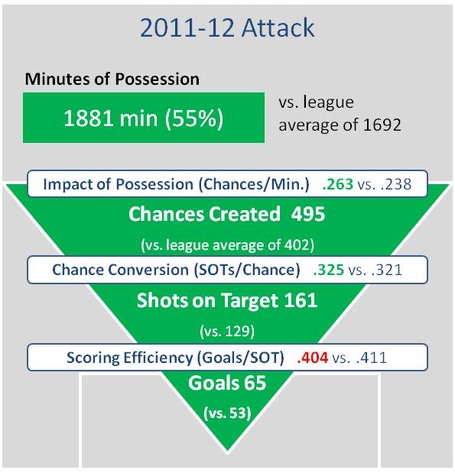 The quick review of Chelsea's 2011-12 attack is that it is above average across the board. The only problem is that Chelsea aspires to championships and not just being above average. To get back in the Premier League title hunt they are likely to have to get from last season's total of 65 goals to AT LEAST 80 if not closer to the 90-ish scored by Manchester United (89) and Manchester City (93). Chelsea's possession was among the best in the league so we will focus on the rest of the "funnel" as potential areas for improvement from "pretty good" to "exceptional". Chelsea's #9 issues were certainly the most well-publicized and that won't be improving with the departure of their most effective center forward in Didier Drogba. Even a great replacement for Drogba won't net Chelsea 25 more goals than last season so that points to the need for more Chances Created and more SOTs as well as an improvement in the rate of converting SOTs into goals. Who would have guessed that Champions League holders might have so much to do. 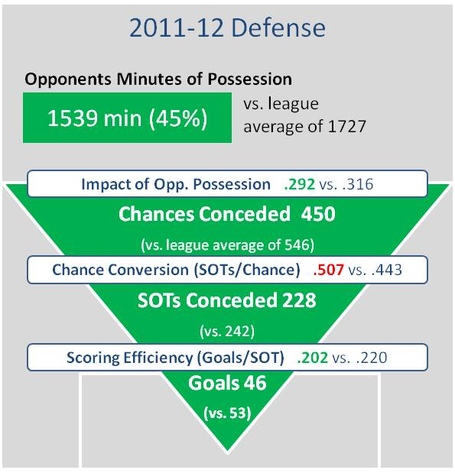 Like their attack, the Chelsea defense was definitely above average when measured by the ultimate metric (goals allowed). The problem is that, like their attack, there is a significant step to be taken before they can be considered in the same boat as the two teams from Manchester. I'd say they need to shave a MINIMUM of 10 goals off their season total from last year to climb back into title contention. Based on the numbers above, the obvious place to start looking is the Blues' worse-than-average propensity for allowing "Chances" to turn into "Shots on Target". This likely rests largely on the backs of the central defenders and the holding midfielder with some culpability also going to the outside defenders.

Activity So Far: Didier Drogba out; Solomon Kalou out; Eden Hazard in; Marko Marin in.

Biggest Gaps: A goal scoring center forward, an above average holding midfielder, and a right back.

Analysis: There is no question that between the change in managers last season, the January addition of Gary Cahill, and the addition of Europe's prized young asset in Eden Hazard that Chelsea have gotten better since the hit the depths immediately before AVB was dismissed. That isn't really in doubt. The question is really HOW much better have they gotten? Will they continue to improve? And can they close the gap on Manchester United and Manchester City?

Even if you aren't a Chelsea supporter (and I think you all know I'm not), you can't help but be impressed by the work that Roberto di Mateo did in the second half of the season. The FA Cup and Champions League titles speak for themselves. Still, I can't help but think that even the best manager in the world won't make up even half of a 35 goal difference between Chelsea's goal differential and that of the Manchester teams.

If the change in manager isn't going to make up the difference then we have to look to the changes in the line-up. Here are the key things that will be different:

Verdict in the Real World - I like what Chelsea have done so far and I'm excited to see what the attack Arsenal would have bought in the pre-oil money days (Hazard and Mata) can do together. Despite that, I can't really consider Chelsea a serious title contender based on what they've done so far. They just haven't done enough to convince me that they can make up 35 goals. If they have then Spurs supporters should be REALLY WORRIED that they've just hired a manager who has so dramatically changed the fortunes of one of their local rivals by being fired. I'd put Chelsea as the logical 3rd place finisher in the league right now with a chance of approaching United for second.
Fantasy Ups and Downs
Should be an interesting close to the transfer window for Chelsea and an even more fascinating season.