Yesterday marked the end of an era at Goodison Park as longtime fan favorite and fantasy conundrum Tim Cahill prepared to leave Everton and the Premier League for Major League Soccer's New York Red Bulls. Cahill is a great symbol of the success that David Moyes has had putting together a consistently pretty good team on a consistently pretty small budget. For those of you who wonder why the budget is consistently small for a successful club in a big city, here's more than you likely ever wanted to know from the always excellent Swiss Ramble (warning VERY safe for work - in fact, it looks very much like work with charts and spreadsheets and everything). With that as background, we'll take a look at how Everton did last season, where they would be best served investing any funds they have to improve, and how that might work out for them this season both in the fantasy world and in reality. 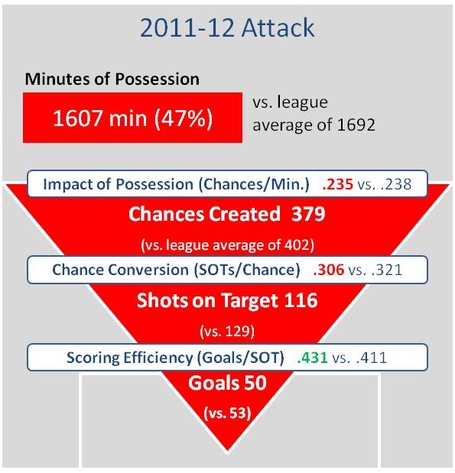 The chart above shows a lot of red but a closer read indicates that Everton were just a shade below average across the board as an attacking force during the 2011-12 season. If they can continue to be a better than average defense (see below) then they can likely tread water and continue to be a mid-table or slightly better team that people respect for their grit and determination but never really take seriously as a threat beyond the odd upset of a top team. If Everton want to make a serious jump and compete for 4th, 5th or 6th with Arsenal, Liverpool, Spurs, and Newcastle (Chelsea and the Manchester clubs are way beyond their reach at this point) then the attack is where they must look. If it were me, I'd be looking at my central midfield wheelhouse and an investment in the sort of creative force that Mikeal Arteta gave them before he got hurt and then went to Arsenal. There are some solid elements within the Everton midfield but between Fellaini, Osman, Rodwell, and Barkley there really shouldn't be much expectation of the sort of possession game that could make the rest of Everton's attacking mediocrity OK by just increasing the sheer number of chances. Obviously the big names that could fill these gaps are too expensive for Everton but this is the biggest area of need. 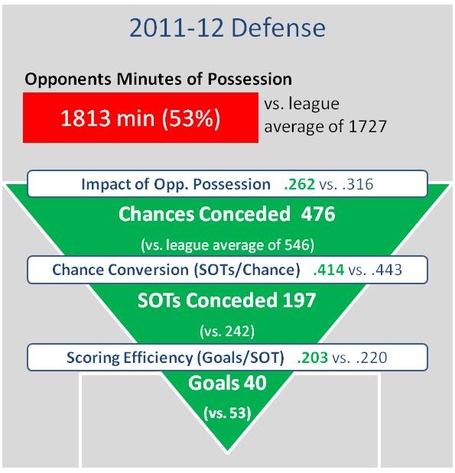 As you can see from the green that permeates Everton's defensive ratings, they are above average almost across the board when it comes to defending and the end results were tied with cross-town rivals Liverpool for 3rd best in the league. The answer here is to keep doing what you're doing with the potential that an improved midfield wheelhouse might limit opposition possession and leave even less opportunity for attackers to test Everton's stout defense.

So, if the goal is to improve the midfield wheelhouse, how are Everton doing so far?

Honestly, the only thing positive here is that the temptation to hope that Tim Cahill will return to his goalscoring ways and take up a spot that one of Everton's younger players could occupy with some potential upside has been removed by Cahill's exit. If Pienaar returns then that will definitely help but it certainly isn't the tonic that Everton needs to do anything more than replace what they have lost as Cahill has deteriorated over the last 18 months or so.

If they're going to take a jump forward then they have to a) keep Leighton Baines (or pull a major bargain out of their hat after selling him for a ton of money); b) bring in Pienaar; c) hope that Naismith is as strong an acquisition as his former strike partner Jelavic was; and d) finds an interesting bargain to improve their midfield. If we're going speculative, I'd suggest that bringing Charlie Adam over from the red side of Liverpool would be a great idea for the Toffees. Adam will likely be relegated to the bench with Lucas, Gerrard, and someone like Joe Allen representing the sort of midfield that Brendan Rodgers wants. Henderson will stay because he's young and Liverpool will hope he'll come good on the insane transfer fee they paid. Adam on the other hand, doesn't really have any upside and they'd be wise to sell him while he still has some value left. Just my wild speculation but it makes sense to me.

Verdict in the Real World

Tell me if you've heard this before. Everton will start off slowly after losing a key player to a "big club" toward the end of the transfer window. Toward the end of the first half of the season they will rebound and start a climb up the table that will see them finish 8th or thereabouts. Unless something great happens to Everton (read Oil Money) or something really bad happens to one of the clubs ahead of them (read injuries or unexpected transfers out).

Verdict in the Fantasy World

In Everton, we have pretty well established club chocked full of players that have established track records which usually means that they are priced fairly with few bargains to be found. The only sources of potential upside are: