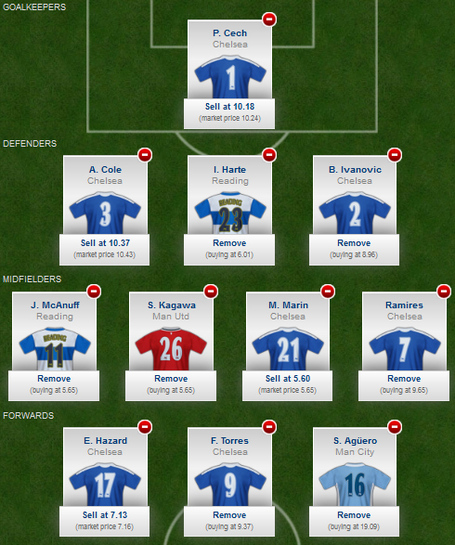 You'll have noticed my posting has been sparse over the past month and that's because I am getting married exactly two weeks today, Saturday 25th August. As many of you will know and the rest of you can imagine, this is an incredibly stressful time with pretty much all of my free time taken up with planning ahead of the big day, so I expect this decrease in my blog activity to continue for the first few weeks of the season as I slowly have a meltdown.

Now this would've been a major problem over on AM Blog, but as part of the NMA family I have my blog brothers Neal and Jeremy to take the majority of the load for a while, a favour I promise to repay them on my full-time return.

I have found myself with a spare 30 minutes this morning before we travel to the wedding venue for a "run through" of the plans for the day and to meet our photographer to get an early idea of snaps we'd like taken, so I thought I'd quickly show you how I'm thinking Ill approach Week 1, where Chelsea & Reading play twice and all other teams play a single game.

This a bit of a shame - I really dislike "Two Team DWs" as it limits your scope massively, so it's not an ideal way for a new fantasy season to kick-off, but needs must and you'll need to fix up your side with a number of players from these two teams to give yourself a chance of two rounds of points.

As you can see mine is massively Chelsea heavy at the moment and this is something I recommend you all look to do as the Blues face two relatively easy fixtures away at Wigan and of course, Reading (at home) in Week 1.

We can't be sure at this time how Roberto Di Matteo will rotate his squad but I'm confident that Petr Cech, Ashley Cole, Ramires & Fernando Torres will start both matches. I'm also fairly sure Branislav Ivanovic will take the right back slot unless the club bring in a new face in the next few days, while Marko Marin and Eden Hazard have a decent chance of two starts and at least 120 minutes, with Oscar likely to be a latecomer after Brazil's run at the Olympics.

I feel I should include a couple of Reading players too (they face Stoke at home before Chelsea come to visit), so as Neal alluded to in his preview, Ian Harte (set piece and penalty taker) is likely to take a spot in my defence provided there is confirmation the 34 year old will start the season at left-back. I'm also making room for an old favourite of mine from his Crystal Palace days, Jobi McAnuff, who was the creative fulcrum in Reading's promotion last season and could make name for himself in the big leagues.

I wanted to include a couple of "non-double gamers" so I'm probably going to take a punt on Manchester United's new boy Shinji Kagawa despite a tricky trip to Everton, and I'm paying big-bucks for Sergio Aguero, as I expect him to pick up where he left off last season, with a goal (sealing the title for Manchester City on that occasion), at home to newly-promoted Southampton on the opening weekend.

There are other players I'm keeping an eye on, namely Fabio (possibly in for Harte), John Terry (to replace Ivanovic with the money saved from the Harte-Fabio switch), Jan Vertoghen, Danny Guthrie, David Silva, Gylfi Sigurdsson, Romelu Lukaku & Pavel Pogrebnyak but I'm happy with the above as a starting point. There is also a high probability that we'll see some further transfer activity before the first deadline on Saturday 18th August which could offer more options (provided Yahoo's fantasy guys have the players added in time - they are much more efficient these days).

I'll leave it there for now but I hope to return with my Week 1 Player Picks on Wednesday. Until then, let's enjoy the final two days of the Olympics and the Community Shield between Chelsea and Manchester City on Sunday. What a summer of sport we've had to enjoy - hopefully the new season will continue this trend. It's definitely good to be back.