Share All sharing options for: On the Barn Door - Week 1

My wheelings and dealings after (well, during really) the first round of Premier League matches. 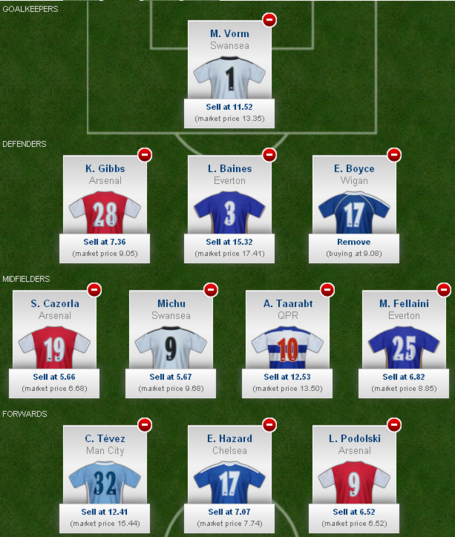 The only change here that isn't locked down is Emmerson Boyce. That spot is currently Branislav Ivanovic's. It seems rude - not to mention foolish - to sell him after his match-winning performance at the weekend. But with a tougher match against Newcastle United, followed by an off week, I'm looking at other options.

Otherwise, you'll see I tried to grab some of this week's stand-out performers before their prices rose. That would include Carlos Tevez, Eden Hazard (see Ivanovic above for my thoughts on him), Michu, and Marouane Fellaini. Kieron Gibbs and Adel Taarabt were worth picking up, just in case. As was Leighton Baines and Michel Vorm.

Fulham players were "overlooked" because they go to Old Trattford next. They have never traveled well, and it will be interesting to see if their hiding of Norwich was more a reflection of them or of the Canaries. Regardless, Bryan Ruiz is still well priced if he can repeat the weekend's return up north.

Lukas Podolski was brought in for Fernando Torres to free up some money, and because I think he may have a bounce-back (or at least bounce) match against Stoke City. Though I've already bet against Stoke this season and come up empty. See Pogrebnyak, Pavel and the rules.

Overall, I'm happy with the team's direction. I will be looking at the fixtures and possibilities more closely over the next few days and of course, sharing with you anything that I learn.

In the meantime, how is your week two squad shaping up?