Gameweek 22 preview: Cole to light up the Double Gameweek?

To the die-hard Fantasy manager, the FA Cup is nothing but an inconvenience.

It is simply an unwanted chance for your players to get injured, to suddenly rediscover some flickering form or to play themselves out of contention for the next league game. What use were last weekend’s goals from Robin van Persie, Michu and Luis Suarez to anyone but Uruguayan Beach Volleyball Team selectors anyway?

Fear not though, for the Premier League returns this weekend, and it does so with a bang for the European champions (yes, believe it or not they still are).

Branislav Ivanovic (£7.1m) may have exhibited a worrying fondness for providing assists for the opposition during the midweek Capital One Cup defeat to Swansea, but if we’re going to stay strong and keep our disdain for the cup competitions alive then we are going to have to ignore that and instead look forward to him taking his place in a Chelsea defence which is about to embark on a Double Gameweek. Or will he?

The gradual return to fitness for John Terry (£6.5m) and the constant relocation of David Luiz (£6.6m) – sometimes inadvertently – means that the only member of Chelsea’s back four surely certain to line up against both Stoke and Southampton is Ashley Cole (£6.5m), who looks to be a fine investment for Fantasy bosses who may have activated their January wildcard ahead of this weekend, and who scored the winner and kept a clean sheet which Stoke visited Stamford Bridge in September.

Further forward, the signing of Demba Ba (£8.6m) has put the once secure place for Fernando Torres (£9.8m) under threat, whilst Rafael Benitez will surely avoid angering Fantasy bosses for a second Gameweek running and restore Juan Mata (£9.9m) to his Premier League line-up after resting him for the shock loss at home to QPR.

Harry Redknapp’s side entertain the manager’s former club Tottenham at Loftus Road in Saturday’s early match, with Gareth Bale (£9.8m) primed to score big on a weekend when many of his highly priced rivals are facing tougher fixtures. A wildcard move for the Welshman could have benefits well beyond this Gameweek.

Before the FA Cup so rudely interrupted us the name on everyone’s lips was that of Theo Walcott (£9.0m) but he and Arsenal face a tough test at home to Manchester City this weekend, with City likely to be missing the hamstrung Sergio Aguero (£11.0m) and Carlos Tevez (£8.9m) looking to start.

Suarez (£10.4m) won’t have many friends at Old Trafford and is unlikely to find many points either, with Robin van Persie (£14.0m) certain to lead the line for Manchester United against Liverpool. Those who back the Reds defence – which could include the cheap Andre Wisdom (£4.3m) after Jose Enrique (£5.9m) was ruled out for six weeks – to keep out the Dutchman aren’t short of options to replace him, with one of those options coming at Sunderland.

The Mackems have a relatively friendly set of four fixtures coming up, and so Fantasy bosses who had lost faith in Steven Fletcher (£7.0m) could be tempted to turn back to the Scotsman ahead of his side’s home match against West Ham, whilst the departure of Ba is sure to see Papiss Cisse (£8.8m) given a central striking role for Newcastle’s visit to Norwich if he can overcome a knock.

Another battling injury is Southampton’s Gaston Ramirez (£5.6m), but the Uruguyan is certainly worth keeping an eye on ahead of the Saints’ Double Gameweek trips to Aston Villa and Chelsea, whilst teenage full-back Luke Shaw (£4.0m) could find himself becoming an inexpensive addition to plenty of teams once that wildcard kicks in.

Whilst his price hasn’t yet risen, Marouane Fellaini’s (£7.4m) has been falling ever since his three-match ban, but with the Belgian back and ready to play a part in what look to be a winnable next four games for Everton, starting with this weekend against Swansea, then his addition could be crucial.

For news, views and insight into the #FPL game from PremierLeague.com, head over to www.fantasyyirma.com or follow us on twitter @fantasyyirma

You can still join the FantasyYirma FPL mini-league also- be warned the competition is tough! The FY mini-league is now one of the top5 in the overall game! Click the table below to join. 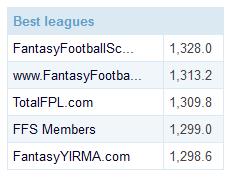