Well, here we go. Big double week with questions hanging over both teams. Never a good situation. You can read all of the will he/won't he in the Injuries and Suspensions post. Here's my line-up and my rationale: 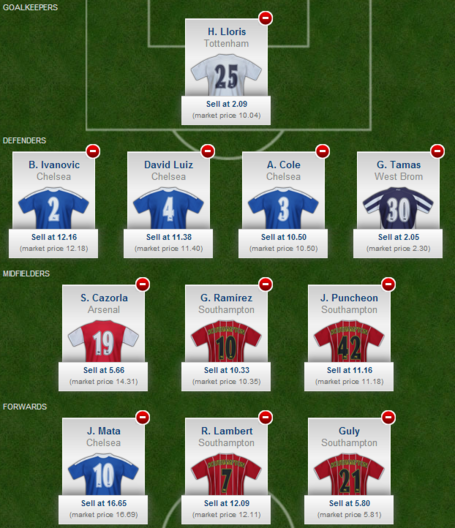 Overall, as you can see, I'm betting on Chelsea defence and Southampton attack. That's mostly based on their weekend match-ups. Stoke away is a tough draw for Chelsea, and as I posted on Twitter:

Meanwhile, Southampton travel to Aston Villa who are shipping goals like crazy. Even at Villa Park, you have to fancy Southampton to score.

The mid-week head-to-head matchup is more of a crap shoot. Certainly Chelsea will be strongly favoured, especially after sinking the Saints 5-1 last week in the FA Cup. But with rotation - and Rafa'tation - in play, and the cost of the likes of Demba Ba and Frank Lampard... well, I'm trying to find value where I can.

So, that's my overall view. As to the particular players:

Hugo Lloris - have him cheap, and not giving him up for all the two-gamers in China. Especially not when we now have doubt over Petr Cech's availability for one, or both, of Chelsea's matches.

Gabriel Tamas - an enabler, and will only play if Jonas Olsson isn't recovered from injury. That being said, if he does play he has a chance at a clean sheet, at Reading.

David Luiz - in midfield, taking kicks... sign me up. Maybe he gets rested. Maybe he plays center back. But it's the brave fantasy manager who goes into the week without Sideshow Bob.

Branislav Ivanovic - he scores when he wants to, and after his horror show in midweek... he wants to.

Ashley Cole - have an idea that Ryan Bertrand gets a game this mid-week, but Cole settled the reverse fixture with a goal, so you never know what could happen.

Santi Cazorla - no two-gamer can move Santi from this spot, especially as he has a double next week. I did sell Theo Walcott at a discount, but no way I'm selling Cazorla other than by horrible accident. (Sorry, man.)

Jason Puncheon - he can disappear in some matches, but more often than not (and more often against lesser opposition, like Villa) he returns value. Not cheap anymore, but worth the investment.

Guly - Guilherme Raymundo do Prado has been starting for the Saints since Adam Lallana went down with his knee injury. He's even taking corner kicks. I've wanted to pick him up for the last few weeks now, and with two games I'm surely not going to miss the chance now. He may lose his spot to Jay Rodriguez (or maybe JRod comes in for a not-fit Ramirez) but at the price, I think Guly is a good bet. If he's not in the eleven, he'll be the first or second player off the bench.

Rickie Lambert - Because of the matchups, I'm willing to pay a little more for Lambert over Eden Hazard. Hopefully he gets a hat-full against Aston Villa. Certainly he'll be Saints main man in both matches.

Juan Mata - he was rested against Queens Park Rangers, and we all know how that turned out. He has played both matches since then, so I'm worried about Rafa'tation. But he's the most likely of Chelsea's attackers for me - over Frank Lampard, who is a little cheaper, and he's less expensive than Ba - so he makes the cut. Hopefully he's taking set pieces, scoring goals, and assisting others whom I also have on my fantasy team, and not those that I don't.

I have been playing with the idea of selling Mata and Cole for Hazard and Lampard, but I'm reluctant to do so based on my overall impression that at Stoke will be tough and that Rafa could rotate for midweek.

I'm pretty comfortable with this line up, but at the same time I'm sure that I'm making all the wrong picks.