The Assistant to the Assistant Manager is back with the fantasy Premier League players to choose in week 23 - a double for West Ham and Arsenal.

Collect them all. Arsenal have been out of sorts (Recently? For years? Ask Neal,), but are capable of scoring big on occasion. And West Ham are capable of letting a team - including these Gunners in the reverse fixture score. So while at Chelsea isn't great (though home to Chelsea is worse these days) you can't ignore the Gunners.

Lukas Podolski - team in a microcosm. Does nothing 90% of the time, but will score against the league's lesser teams (and Spurs).

Olivier Giroud - back from injury and should be leading the line for Arsenal. His fantasy scoring hasn't been much better than Podolski's but he still seems the more likely player.

Theo Walcott - will probably lose his central role to Giroud, but is still a midfielder on the right-side of an attacking three. And Giroud may be eased back as West Ham will be Arsenal's third match in a week. TW14 is probably worth the cost.

Jack Wilshere - he's always been the guy behind the guy getting the fantasy points, but that is changing. He scored again against Swansea yesterday after being moved into "the hole" - played even in front of Santi Cazorla. He also took the lion's share of set pieces in that game. Cheap, and though I would never have recommended him before, I do now.

Santi Cazorla - at market price, you think twice about bringing him in. Especially if you're deciding between him and Theo. But on the balance, you do it. And if you have him at a discount, he's like old drapes - you don't even notice they're there any more.

Kieran Gibbs - yes, even at cost.

Other Arsenal defenders - yes, even without great hopes. Bacary Sagna and Tomas Vermaelan are my picks. Laurent Koscielny is cheap after his horror show against Manchester City, but presumably one of him and Per Mertesacker rotate alongside the Verminator.

Carlton Cole - cheap, starting forward. And we still have residual good feelings from this pick.

Joe Cole - cheap, and will presumably be given every opportunity to contribute.

Kevin Nolan - off the boil for a while, but should return value over two matches. Arsenal may be troubled by his physicality.

Mohamed Diamé - I just love watching him play. I probably wouldn't pick him for a fantasy team, but he does get forward and is capable of the great goal. I'm just not sure he's fit enough for three matches in a week after playing yesterday against Manchester United.

Daniel Potts - young defender getting his chance due to injuries. I like him and his chance for points this week.

Manchester City host Fulham, so I'm listening to any arguments for Edin Dzeko, David Silva, and James Milner in the Yaya Toure role.

Newcastle United host Reading so Papis Cisse, Sylvain Marveaux (if Yohan Cabaye isn't ready for a full return), Cabaye (if he is), and new boy Mathieu Debuchy are options.

Aston Villa travel the short way to West Brom. Though this is a derby I'm backing Romelu Lukaku. He's on fire right now, and his competition for that starting forward spot, Shane Long and Marc-Antoine Fortune, are 50/50 with injuries. Chris Brunt should return from illness, and he'll get set-pieces. 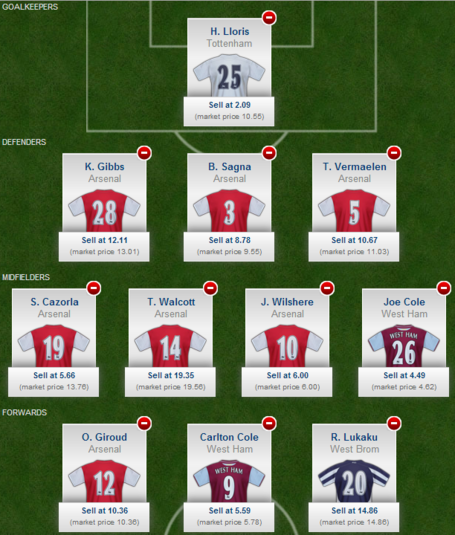 Podolski could come in for Lukaku if I decide to go for the 2-gamer whitewash. If so, I might change Cole to Nolan.