Neal has covered the Liverpool and Swansea players in The Week Ahead post so instead of duplicating effort with a very similar write-up I thought I'd give our readers a preview of my potential Week 26 team.

I'm on something of a run in Yahoo Fantasy Football at the moment. Back in December I was struggling down in 3000th position overall and feeling rather down in the dumps, but it's been a different story over the past 6 weeks.

My team, AM FC [@NMA_Blog], now sits 263rd overall for the season and 7th on the leaderboard for the second half of the season. The turnaround has coincided with me changing the majority of my team each and every week, dumping discounts if they don't have a decent match-up and keeping only Hugo Lloris, Jan Vertonghen and Santi Cazorla as my long term investments.

This strategy has allowed me to pack my team with double-game players when required and this has proved hugely profitable, but as you can see from my unsaved team below I'm struggling to fit any more than 6 double-gamers in my team for Week 26 due to the high price of Luis Suarez and the high prices of starting defenders from both Liverpool and Swansea. 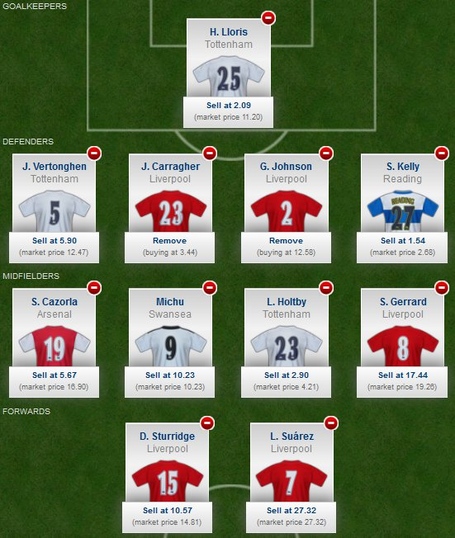 I'm still holding the Newcastle pairing of Mathieu Debuchy and Moussa Sissoko at discount in Jamie Carragher and Glen Johnson's spots but I'm ready to dump both of them to back the double-week. I feel Michu, Steven Gerrard, Daniel Sturridge and Suarez are must-have picks and I'll definitely keep Lloris and Cazorla while Lewis Holtby may stay at 2.90, as could Stephen Kelly at 1.54. However, I am toying with the idea of switching Vertonghen to Philippe Coutinho or downgrading Johnson to Daniel Agger to free up even more funds in an attempt to fit 7 or 8 quality double-gamers in my team come the deadline on Saturday.

I definitely want two Liverpool defenders for their two home-games and I'd love a Swansea defender to join them if possible (and as Neal stated, Ben Davies is the clear pick there) but that's likely to prove impossible given the cost. How lovely it would be if a random Yahoo price swing brought Suarez down to 25, or even less, and also reduced the cost of some of the double-game defenders, but perhaps that's too much to ask.

How's your team shaping up?