MUFC's fan post has already ignited some great discussion around the best options for the upcoming week (and Neal will add to that with "The Week Ahead" post) so instead of my usual Player Picks I thought I'd give you a look at my current team.

Firstly, it's clear that there is a severe lack of "stand-out" fixtures in Week 32, with the only games that really interest me being Liverpool v West Ham, Chelsea v Sunderland, and Newcastle v Fulham.

I also quite like the look of Southampton @ Reading and there could be goals in QPR v Wigan, but aside from that the other match-ups look very tight.

So based on those views, here's what I have (unsaved) on my team page: 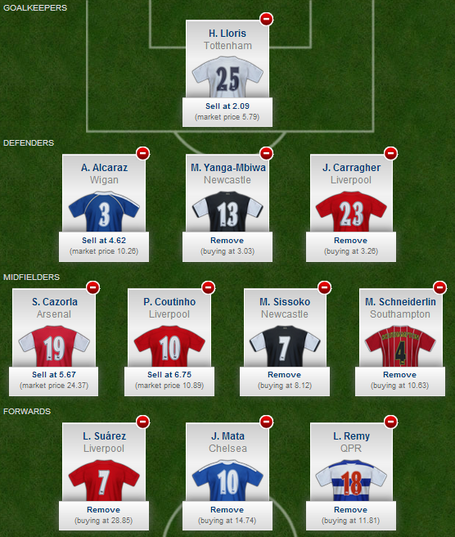 As you can see, I missed the barndoor in Week 31 so I'm paying top whack for the majority of my side.

In net I'm sticking with Hugo Lloris for the season now it's been confirmed he's back in training. If I had to drop him I would've gone for the Newcastle keeper (Rob Elliot or Tim Krul depending on news).

I like my defence - Antolin Alcaraz is a season keeper at 4 while Mapou Yanga-Mbiwa and Jamie Carragher both offer fantastic value given their match-ups. Fulham are poor on the road while West Ham without Andy Carroll (who can't play against his parent club) are toothless. I may still look at Ryan Bertrand, but at the moment I'm happy with my back-line.

No need to explain Santi Cazorla, nor Philippe Coutinho at that price. I'm leaning towards the cheaper Moussa Sissoko rather than paying close to 15.00 for Yohan Cabaye, although that could change closer to deadline. I've also not discarded the idea of bringing Frank Lampard or Steven Gerrard in, but at the moment I'm taking a punt on Southampton's Morgan Schneiderlin. The young box-to-box midfielder has been outstanding all season and he has a knack for popping up with a goal, so I'm hoping he grabs one at woeful Reading.

Upfront I'm still undecided if Luis Suarez is worth lumping almost 30.00 on, but then this is just the sort of match he'll grab a couple of goals, hit a bunch of SOTs and return 40 points. At the moment his price isn't crippling the rest of my side too badly, so it's possible he stays. I definitely need a Chelsea attacker against Sunderland and at the moment I'm looking at Juan Mata, but it could be Eden Hazard, or even Victor Moses. My decision will depend on who plays in the Europa League as that will give us an indication of who might start and who might be rested. I don't think I'll risk more than one Chelsea player though - I can't afford more than one zero. Finally, Loic Remy looks like good value at home to Wigan in a game I'm predicting will end 2-2, so he'll probably take a spot in my front-line come deadline.

So that's where I am with my current side. I'd love to read any opinions on the above and please feel free to post your own team below so I can provide feedback.

A final word to remind you that Week 32 is the Semi Final of The NMA Blog Cup ... are you still in it?