It's a double week for Arsenal, Manchester United, Everton, Fulham and West Ham, while Tottenham, Swansea and West Brom have a blank week. With only 5 weeks of the season to go, it's time to load up on the DGers ...

Looking at the fixtures it's clear that Arsenal have the pick of the bunch with two home games, although after an easy match against Norwich it's a far tougher proposition as Everton travel down from Merseyside.

Everton themselves have a nice home game against almost-relegated QPR before they go to the Emirates.

Manchester United have two winnable away matches at Stoke and West Ham.

West Ham face a tricky trip to Southampton before that game against the red half of Manchester.

From the single gamers Liverpool's trip to Reading looks tasty, as does Manchester City hosting Wigan.

Here's what I have on my team page: 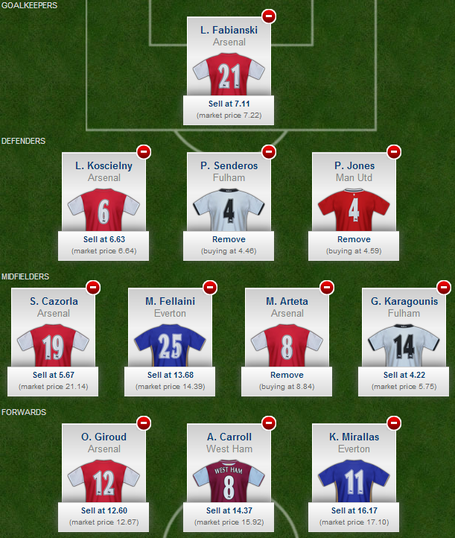 I have 1.66 left in the bank and I'm still holding Jamie Carragher, Antolin Alcaraz & Philippe Coutinho behind the scenes at discount.

Missing Lukasz Fabianski @ 5ish and Tomas Rosicky @ 2 has hurt my team, but there's nothing that can be done and I actually quite like what I have at the moment.

Fabianski @7, Laurent Koscielny, Mikel Arteta, Marouane Fellaini, Santi Cazorla, Olivier Giroud and Kevin Mirallas will all stay barring injury news. I think all seven men have an excellent chance of playing close to 180 minutes next week. I also don't hate the idea of keeping Andy Carroll, although if I can find a way to squeeze Wayne Rooney in to his position then I would probably take that option.

Philippe Senderos seems good value with two starts almost guaranteed but I'm less settled on Phil Jones and Giorgos Karagounis. It's quite possible I switch them back to Carragher and Coutinho for Liverpool's very winnable game at Reading, which would leave me with 9 double-gamers.

Those are my early thoughts. How are you looking to approach this week?